Famous Historical Monuments in Uttar Pradesh Uttar Pradesh - Photographers' Delight Kite Festival in Lucknow Travel to Muzaffarnagar Travel to Raebareli Kanpur The Leather City Tourist Places in Unnao Weekend Getaways from Pilibhit Banarasi Sarees in Varanasi Things To Do in Bijnor Glass Industry in Firozabad Govardhan Parikrama in Mathura Tourism in Mainpuri Wildlife Sanctuaries near Mirzapur History of Bahraich Tourist Spots in Hapur Miracles of Banke Bihari Temple Tourist Spots in Bulandshahr Travel to Fatehpur Tourism in Fatehgarh Chronology of Jhansi Etah Tourism Culture of Rampur About Shahjahanpur Vindhyachal to Varanasi by Road Tourism in Hathras Tourism in Sambhal Famous Personalities of Faizabad Tronica City in Loni Culture of Ballia Jaunpur in One Day Culture of Etawah Meerut One Day Itinerary A Day in Allahabad - More than Just a Spiritual Experience Ghaziabad.... A Street Food Safari Shopping in Aligarh Top Famous Restaurants for Working Professionals in Noida Tourism in Mughalsarai Prominent Modern Industries in Kanpur Historic Events in Gorakhpur Air Safari in Agra Jim Corbett National Park Road Trip from Lucknow to Nainital via Corbett What Not to Miss while in Varanasi
Home about health up public health and engineering department

Uttar Pradesh is an expansive state having an area of about three hundred and thousand square kilometers. This area encapsulates seventy two districts which are further divided into eight hundred and twenty blocks. There are more than one lakh inhabited villages in the state. This entire area in its various sub units supports a population of about twenty crores. It is the fourth largest state in terms of area and second only to Bihar in terms of population. 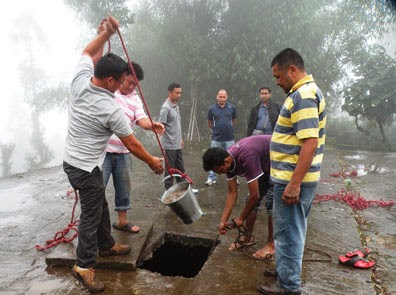 The entire water and sanitation arrangements of the state are managed by the water sanitation support organization set up by the Uttar Pradesh Government. The Water Sanitation Support Organization or the WSSO as it is popularly called. It was formed to spear-head the state water and Sanitation Mission.

The need for the Water Mission arose because safe drinking water had increasingly become difficult to obtain by large sections of the rural, semi-urban as well as the slums populations of Uttar Pradesh.

They were also giving free access for the designing and planning as well as implementation of the various schemes suitable to the many sections of the village society. Thus, the WSSO was initiated to carry out a number of integrated functions for facilitation of the water and sanitation provision in both the rural and urban areas of Uttar Pradesh. It was the initiative of the Uttar Pradesh Government to successfully implement these schemes under the WSSO.

Among its various other functions there was the chief duty of the WSSO to ensure smooth and fruitful implementation of the programme through various facilitating agencies like the Jal Sansthan, Uttar Pradesh Jal Nigam, the Uttar Pradesh Agro and also the U.P. Swajaldhara.

The WSSO coordinates on an everyday basis virtually with the villages through their Panchayati Raj Institutions or PRIs. This ensured the larger participation of the community which would collaborate in ensuring water safety as well as its security at the grassroots level.

Uttar Pradesh has been one of the pioneering states in the country to implement the Solid Waste Management systems in its various cities and town. Some of the cities where the programme has been implemented successfully are namely Basti, Loni, Ferozabad, Kannauj, Barabanki, Mainpuri, Ballia, Fatehpur, Badaun. Raibareilly, Etawah, Sambhal, Jaunpur, Mirzapur, Muzaffarnagar, Jhansi, Aligarh, Gorakhpur, Moradabad, Mathura, Meerut, Prayagraj, Agra, Varanasi, Kanpur and Lucknow.

The Solid Waste Management or SWM Schemes are being implemented through the adoption of the Private Public Partnerships to ensure greater success. A lot of work, however, needs to be done to ensure proper segregation of waste, its adequate and complete disposal is dependant upon recycling, reuse and refuse of waste wheel is at the end incinerated.

Towards this end, Uttar Pradesh has initiated the door-to-door collection of garbage and processing plants been set up in ten other cities. The project will be expanded to three other cities in the coming year.

The impact of the various schemes has led to increased access to adequate, safe and sustainable resources of water as well as sanitation facilities, having a positive impact on the health and hygiene of the men, women, youth and children of both rural and urban regions of Uttar Pradesh.