Famous Historical Monuments in Uttar Pradesh Uttar Pradesh - Photographers' Delight Kite Festival in Lucknow Travel to Muzaffarnagar Travel to Raebareli Kanpur The Leather City Tourist Places in Unnao Weekend Getaways from Pilibhit Banarasi Sarees in Varanasi Things To Do in Bijnor Glass Industry in Firozabad Govardhan Parikrama in Mathura Tourism in Mainpuri Wildlife Sanctuaries near Mirzapur History of Bahraich Tourist Spots in Hapur Miracles of Banke Bihari Temple Tourist Spots in Bulandshahr Travel to Fatehpur Tourism in Fatehgarh Chronology of Jhansi Etah Tourism Culture of Rampur About Shahjahanpur Vindhyachal to Varanasi by Road Tourism in Hathras Tourism in Sambhal Famous Personalities of Faizabad Tronica City in Loni Culture of Ballia Jaunpur in One Day Culture of Etawah Meerut One Day Itinerary A Day in Allahabad - More than Just a Spiritual Experience Ghaziabad.... A Street Food Safari Shopping in Aligarh Top Famous Restaurants for Working Professionals in Noida Tourism in Mughalsarai Prominent Modern Industries in Kanpur Historic Events in Gorakhpur Air Safari in Agra Jim Corbett National Park Road Trip from Lucknow to Nainital via Corbett What Not to Miss while in Varanasi
Home about profile culture cuisines of uttar pradesh

Uttar Pradesh is the most populous state of India which is a pointer to its inter-cultural and inter-religious dimensions. With a background of rich historical traditions and practices left behind by the many influences of the Buddhists, Persians, Mughals and the British, the cuisine of the state truly reflects all that was identified with each of these cultures. 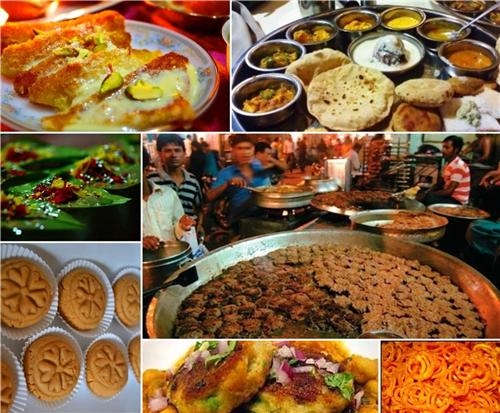 By and large, a majority of the people here are Hindus, Muslims, Christians, Buddhists and Jains make up the rest. While a vast majority of the people enjoy simple vegetarian fare like dal (pulses or lentils), chawal (rice), roti (wheat pancakes rolled flat and cooked on a hot stone griddle or hot plate), subzi (mixed vegetable gravy) with many variations, an equally large population feasts on non-vegetarian delicacies which have been traditionally cooked with ingredients and recipes that were the fare of princely Nawabs.


The two chief types of cuisines are Mughlai and Awadhi (Lucknow). Between the two, they have turned the cooking of food into a finely tuned tradition and art.
Read Here about Awadhi Cuisines
However, the cuisine in Uttar Pradesh is not just about the influences of the princely empires. There are many variations to ordinary, regular fare which have been popularised using the ‘street-food’ concept and is available in any part of the state. In addition, influences from neighbouring states also add to the array of dishes and recipes.

To summarise, it’s quite appropriate to say that the cuisine and geography of the state are the same – vastly diverse and yet unifying. The adaptations and variations of various styles, methods and recipes have firmly put Uttar Pradesh on the cuisine map of the world; dishes like biryanis, koftas, kababs, chaats regularly feature in meal plans and banquets in restaurants and fine-dining centres not only India but also worldwide.

The cuisine of Uttar Pradesh is just as diverse as its geography. Ranging from simple every day fare to rich, elaborate banquets, the cuisine of Uttar Pradesh has absorbed and adapted a variety of cuisines to create an entire smorgasbord of wonderful dishes. The people of Uttar Pradesh love to cook, to eat and to feed! Difference in communities notwithstanding, as a people, they are very warm and hospitable. For most of them, the ultimate in hospitality means you feed your guests till they beg for mercy. 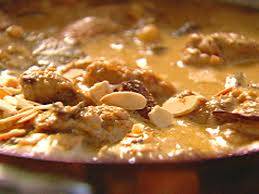 The Mughlai tradition of cooking is a style that was developed in the royal kitchens of the Mughal Kings. It incorporates a mix of ingredients, herbs, spices and methods common to south-east Asia, especially the sub-continent. There is a strong Central Asian influence to this style of cooking; the earliest Mughal rulers, referred to as Chagatai-Turkic Mughals were originally from this region. Through their travels through Mongolia, Afghanistan, Pakistan and the north-west frontier regions of India, the cuisine adopted the highpoints of the people and the foods in these regions before taking shape in the imperial kitchens.

A typical Mughlai meal is a very elaborate dining arrangement with starters, main dishes and accompaniments. The flavours and aroma of ground and whole spices gives the Mughlai cuisine its distinctive taste that can range from mild to very spicy.

The outstandingly unique feature of this cuisine is the ‘Dum Pukht’ method of food preparation where the food is sealed in large handis (cooking pots) and cooked over slow fire which releases the flavour of every ingredient and allows the food to cook in its own juicy elements and the mixture of spices. Rice, cheese and mutton form the three main ingredients that are popularly cooked this way. This entire method is done by a retinue of cooks under the supervision of a head cook (Bawarchi). Some dishes cook for three whole days before the handi is opened releasing its delicate aromas and mouth-watering taste. The secret to this cuisine style is the meticulous portioning and blending of fine spices like cardamom, cinnamon, saffron and many others, which when combined with the foods to be cooked in the right proportions, make wholesome yet delicious dishes. Even common vegetarian dishes are given a ‘royal twist’ by adding certain spices and ingredients and using the slow cooking method.

Uttar Pradesh’s vibrant culture and living is equally matched in its love for food. The food culture is a notable part of the state’s identity. Historically traditional cuisines of the state like the Lucknowi and Awadhi, cuisines from other Indian states like Rajasthan, Gujarat, Maharashtra and Punjab and local street foods vie for place along with international cuisines such as European, American, Chinese, Korean, Thai and Japanese. International fast food groups and chains like Barista, Costa Cafe, KFC, McDonald’s, Papa John’s and Pizza Hut are all part of state’s food skyline.

Several star hotels in Lucknow and other big cities like Agra and Varanasi offer local delicacies like biryanis, kebabs, koftas, pulaos and a range of stuffed breads like rotis and naans along with vegetarian dishes like Tahri and Nargishi koftas. In addition, they also offer continental breakfasts with items like bacons, eggs, hams and steaks. In fact, with the increased flow of international tourists to Uttar Pradesh, continental menus feature high in even smaller hotels and wayside restaurants. Ranking high among the many food delicacies in Uttar Pradesh are Biryanis, Kebabs and Nihari.

The Awadh or Oudh region has foods which are predominantly meat-based attributing to the fact that this region was historically influenced by the Muslim rulers of the Mughal Empire. To indulge the sweet-tooth, Oudh’s Shahi Tukda has now received pan-India presence as a dessert preparation for special occasions.

Kanpur is known for its Boti Biriyani and the Kakori Kebab; Rampur’s Paneer Pasanda is another culinary highpoint, the Rampuri Rohu and Zamindoz are hugely popular among fish-lovers while meat aficionados will not be able to resist the Pasanda Kebab and Shab Deg that are succulent and tempting. The Khurchan and the Peda are irresistible to sweetmeat lovers.

The eastern part of the state is famous for Murg Musallam, a delectable chicken dish and equally for Reshmi Kebabs and Tahri (a rice, lentil and spice preparation).

Varanasi is home to several top grade star hotels, smaller cafes and restaurants; numerous Israeli restaurants have sprouted in the recent years serving comparatively cheap Kosher meat dishes but there are mixed reports in the media that such places are increasingly being used as havens for unsavoury elements.

The residents of Lucknow speak of the ‘culinary nirvana’ one can achieve in the gastronomic capital of the state. The very thought of Lucknow’s kebabs makes one’s taste buds tingle with anticipation. Names like Boti Kebab, Galawat ke Kebab, Ghutwa Kebab, Kakori Kebab, Patili ke Kebab, Seekh Kebab and Shami Kebabs roll off the tongues of food lovers. The pointed reference of nirvana is to the legendary century-old “Tunde ke Kabab”, a unique dish made with minced meat, spices and condiments. The Tunde Kebab is said to include over 150 spices, speculation includes a ‘secret’ condiment that gives it its unique flavour and essence. The main ingredients of this historical dish that is ‘Lucknow’s pride’ are minced lamb, spices, ghee, mint, onions, sugar, vinegar, lime, garlic and ginger.

The name “Tunde” came about because the chef whose specialty were these kebabs, lost an arm in a kite-flying incident, yet managed to turn out delicacies with only one hand; hence the nickname. Believed to be a closely guarded secret and a family tradition, the method of preparing the kebabs and the ingredients rests solely with this family who have passed the skills on to more members and the generations following.


The restaurants in Lucknow do not adopt novel and striking marketing strategies to sell their delightful stuff, every locality and nook in the city is known by the local food delicacies served in that area or the location of a specialty restaurant or food joint – e.g. Patanala Chowk Idris Biriyaniwala, Chowk’s Rahim kulche-nahari eatery, Aminabad’s and Chowk’s Tunde ke Kebab etc. Even the more high-end and luxury hotels and in-house restaurants go all out to serve these Indian delicacies along with international favorites like burgers, rolls and sizzlers.
Click Here to Know about the Famous Biryani Joints in Lucknow
Appetising snacks like chaats, kachoris, samosas, and pakoras are prepared using vegetarian and non-vegetarian ingredients and served with chutneys and sauces. Fruit juices and sharbats (prepared from flower petals and fruits) go hand-in-hand with these snack delicacies.

Famous sweet dishes and drinks like lassi (sweetened yoghurt), kheer (milk pudding), sewian (made with milk, vermicelli, sago and seasoned with ghee, cashews, almonds and dried fruits), Rooh-Afza (a rose flavoured essence concentrate that can be mixed with cold milk or cold water to make delicious beverages) are very popular and are a must in every elaborate meal.

The pethas (soft candy preparations made from ingredients of the ash gourd family like water melons, white pumpkin etc.) have long since been famous in Agra. Newer variations to this are prepared using flavour variants such as angoor (grapes), kesar (saffron), coconut and dry nuts. The peda or pedha is a traditional sweet which is thick and semi-soft and prepared using khoa (dry or thickened milk or dairy product), sugar and spices like cardamom, dry fruits and nuts and saffron. The peda is synonymous with Mathura. Besides these, jalebis (wheat or mixed corn flour piped through a cloth in a round or pretzel shape and deep fried in oil before being soaked in sugar syrup enhanced with rose or cardamom flavouring) and laddoos (rounds balls of sweet confectionery) are commonly served with meals and are a delicacy during festivals.

No Indian meal is complete without the use of betel leaves, areca nuts and spices (paan) to enhance the digestive juices to absorb nutrients and aid easy digestion, especially after elaborate courses of dishes. The ‘Banarasi Paan’ is a traditional offering to visitors in many households and is usually the last serving in every meal.