Famous Historical Monuments in Uttar Pradesh Uttar Pradesh - Photographers' Delight Kite Festival in Lucknow Travel to Muzaffarnagar Travel to Raebareli Kanpur The Leather City Tourist Places in Unnao Weekend Getaways from Pilibhit Banarasi Sarees in Varanasi Things To Do in Bijnor Glass Industry in Firozabad Govardhan Parikrama in Mathura Tourism in Mainpuri Wildlife Sanctuaries near Mirzapur History of Bahraich Tourist Spots in Hapur Miracles of Banke Bihari Temple Tourist Spots in Bulandshahr Travel to Fatehpur Tourism in Fatehgarh Chronology of Jhansi Etah Tourism Culture of Rampur About Shahjahanpur Vindhyachal to Varanasi by Road Tourism in Hathras Tourism in Sambhal Famous Personalities of Faizabad Tronica City in Loni Culture of Ballia Jaunpur in One Day Culture of Etawah Meerut One Day Itinerary A Day in Allahabad - More than Just a Spiritual Experience Ghaziabad.... A Street Food Safari Shopping in Aligarh Top Famous Restaurants for Working Professionals in Noida Tourism in Mughalsarai Prominent Modern Industries in Kanpur Historic Events in Gorakhpur Air Safari in Agra Jim Corbett National Park Road Trip from Lucknow to Nainital via Corbett What Not to Miss while in Varanasi
Home about profile culture fairs and festivals of uttar pradesh

Fairs and Festivals of Uttar Pradesh

Fairs and Festivals of Uttar Pradesh

Uttar Pradesh’s vibrant culture and inter-mingling of religious backgrounds that adds to the very colourful and festive nature of celebrations when it comes to fairs and festivals. There are many festivals, cultural and religious, besides the annual and periodical fairs that make the state come alive in rich splashes of colours.

Called the festival of lights, Deepawali is a five-day event starting with Danteras. Each of the five days is associated with a legend or myth but the celebrations largely reflect the victory of good over evil. It is usually associated with Lord Rama’s return to Ayodhya after his 14-year exile. People all over celebrated this festival by lighting diyas (oil lamps) all around the house to dispel darkness and to welcome light.

This festival celebrates the power of Lord Shiva. Large groups of people gather in temples and pandals to chant and pray to Shiva the whole night; some observe fasting during the day.

This festival pays obeisance to Lord Hanuman, the most ardent disciple of Lord Rama. People pray to Hanuman to be strong like and be victorious against obstacles and to be steadfast in their loyalties.

Janmashtami celebrates the birth of Lord Krishna; the twin cities of Mathura and Vrindavan come alive with cultural events and festivities in the month of ‘Bhadon’ around August during the 8th day of the dark fortnight when Krishna was born. The ‘Rasa Leela’ commemorates Krishna’s ‘leelas’ or his indulgent antics that kept the spirit of kinship alive in Vrindavan. The Vrindavan Sharadotsav is also a parallel celebration of the magical essence of the Brajbhoomi.

This festival marks the bonds between brothers and sisters. Prayers are observed by sisters who undertake fasts for the long life and prosperity of their brothers; they are usually rewarded with blessings and gifts from their brothers.

This festival is celebrated by married Hindu women for the long life and prosperity of their husbands. Karva Chauth falls on the ninth day after Navratri; women spend the day in prayers and fasting till sundown when the moon rises and they break the fast after having a sight of the moon through a sieve.

This festival is celebrated by Muslims after the month-long Ramadan where they fast from sunrise to sunset. Id or Eid marks the end of the Ramadan month in the Muslim calendar. This is a time for prayer and festivity, a time for sharing and doing charity for the less privileged.

Bakr-Id, as this festival is more commonly known is another important event for Muslims. The holiness of this day and the immediate period preceding this is marked by pilgrimages to Mecca.

This solemn occasion marks the martyrdom of the Prophet’s grandson, Imam Hussain. In Lucknow, this event is commemorated by taking out in a procession the replicas of the tomb at Karbala. Men walk on the streets beating their chests in mourning sometimes severely inflicting wounds on themselves.

It is but appropriate to start with the biggest of them all, the mother of all fairs (Melas) that sees the largest throngs of people gathering to celebrate a single event. 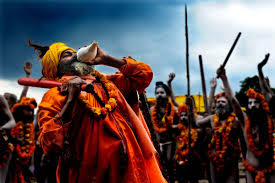 The Allahabad Kumbh Mela is celebrated every twelve years in the Magh month of the traditional calendar; in the Gregorian calendar this corresponds to the months of February-March. The Maha Kumbh is celebrated in rotation every three years at Allahabad, Haridwar, Nasik and Ujjain but it is the Allahabad Kumbh that attracts the largest crowds and the most fervent celebrations; millions of people from India and all over the world gather to pray and immerse themselves in the mighty Ganges to wash away their sins from this worldly life. The highlight of the Kumbh is the elaborate bathing rituals in the sacred rivers, Ganga, Yamuna and Saraswati with a dip in the famous Ganga being the most important ritual in the life of every Hindu akin to attaining salvation.

The Ardh Kumbh is held in the 6th year between the Maha Kumbh at the Sangam, the confluence of the Ganga, Yamuna and the mythical Saraswati usually between the months of January and March.

The Mini Kumbh or the Magh Mela is held every year during the Magh month (January) at the Sangam and is equally popular with devotees who throng the place.

The mighty Ganges is considered the lifeline of India and has nurtured and nourished many civilizations along her banks. This festival is held at Varanasi usually during the Karthik month to offer prayers to the river goddess to thank her for the prosperity she showers and to pray for her blessings. The ghats along the river are decorated with lights and flowers. On Karthik Poornima day, people throng the riverside to light earthen lamps and float them on the river waters.

This very impressive amalgamation of arts, crafts and cultural traits that define Uttar Pradesh is on show at Agra in the month of February each year. Held annually at the Shilpgram, this event organized by the Tourism Department, is a fitting tribute to the legacy of the skilled master craftsmen of the state.

A festival to showcase the art, culture and food of the Braj region in Mathura-Vrindavan, the Braj Mahotsav is celebrated to honour Lord Krishna’s life and times. This celebration precedes the Holi Festival (Rang Gulal), known as the festival of colour because it heralds the arrival of spring in all its vivid and riotous hues. Holi is celebrated with exuberance and liveliness by young and old, smearing each other with colour and dancing to gay abandon. Rasiya is the traditional dance form performed during Holi.

Ayodhya, the birthplace of Rama celebrates Ramnavmi in the month of April. A visual treat of the famous Hindu epic, Ramayana, the Ramlila captures the essence of Maryada Purushottam, Lord Ram and the values he based his life on.

The Ramlila celebrations in Agra between September and October witness the marriage procession (baraat) of Lord Rama as he marries Sita or Janaki. A part of the town is decorated as Janakpuri where Sita lived and as the processions winds its way through the town to the bride’s house, there is immense celebration and fervour like a marriage party with many young girls and boys singing and dancing in front elephants carrying the images of Ram, Lakshman and Janaki.

Traditionally celebrated by Buddhists, the Buddha Mahotsav is a remembrance of Lord Buddha’s life and his teachings; it is celebrated as a three-day long festival held in Sarnath, the place where Buddha preached his first sermon.

Deva is a town situated about 10 kms from Barabanki. The months of October and November see large groups of pilgrims from India, Pakistan and the Middle East countries gather to pray at the shrine of the Sufi Saint Haji Waris Ali Shah.

The banks of the Ganga in Varanasi, specifically the Tulsi Ghat is the site where the 20-day long Krishna Leela festivities and celebrations are held each year. The Nag-Nathaiya Leela depicts the scene where Krishna jumps into the river to subdue the serpent Shesh Nag and emerge victorious standing on the snake hood and playing his flute.

Reviving and resounding with the chivalry and valour that firmly placed Jhansi in the freedom struggle; this festival held in Agra brings alive poignant memories of a glorious past in the history of the country and is celebrated with festivity in February-March.

The first Sunday in the month of November every year is observed as a festival day to honour Mother Mary. The prayers and festivities are also defined by the carnivals and performances that take place around the church in Meerut; people flock in large numbers to visit the church as well as the Italian style palaces in the area built by Begum Samru, the famous nautch girl of the 18th century who quickly rose to become the ruler of Sardhana, which is a small town principality in Meerut. Her husband was the European mercenary Walter Reinhardt Sombre and she inherited considerable wealth; she converted to Christianity from Islam and became known as Joanna Nobilis Sombre.

The birthplace of the 13th Jain Tirthankar, Brahlan Vimal Nath, this place was graced by Lord Mahavir during his wanderings. A Jain Mela is held for five days annually where thousands of Jains gather to worship; the ruins and hillocks dotting the place contain scriptures and relics from the Jain period.

Bateshwar is an important religious centre and is dedicated to the presiding deity, Bateshwar Mahadev an incarnation of Shiva; there are 108 temples around this area that are visited by thousands of devotees who bathe in the waters of the Yamuna and offer prayers at these temples. On the sidelines of the many animal fairs of North India, this dusty town located 70 kms from Agra comes alive in November every year. This is the time the annual cattle fair visits the town; the banks of the Yamuna play host to multitudes of cattle and people buying and selling their fares.
Read Here about Bateshwar Fair

Lucknow springs to life in the months of November-December to recreate the splendour and elegance of bygone Awadh showcasing the arts, crafts and fine dining cuisines, which is an experience of a lifetime.

The art of Yoga and Meditation have influenced the Indian sub-continent for many millennia and now this art has worldwide representation. This festival traces the origin and the journey of Yoga not merely as alternative to medical treatments but in its holistic aspects as a lifestyle.

Comments / Discussion Board - Fairs and Festivals of Uttar Pradesh