Street food of Uttar Pradesh has an innumerable variety of foods to delight every plate. There are food preparations peculiar to areas, people, seasons and even occasions. The humble black gram or chana for example is eaten in a variety of ways especially in Uttar Pradesh which is home to a large number of people. The average dweller of Uttar Pradesh makes delectable dishes of the leaves of the chana plant even as it is growing. The chanas, in their green form, are eaten raw, boiled, steamed and fried with various condiments. Then when they dry up and are sold whole or split by the retailer they are cooked and eaten in several different ways ranging from roasted boiled, dry fried or curried in their whole or split forms. 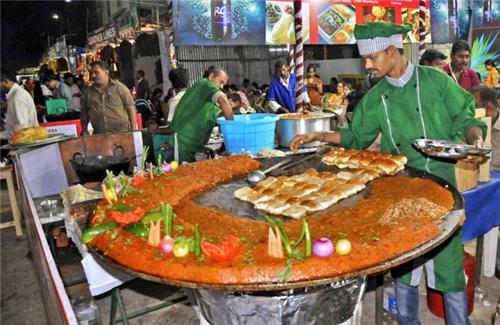 Thus, there is little wonder then that Uttar Pradesh has an enormous variety of street food on offer that ranges from the humble roasted chana to the exotically spiced kebabs and biryanis that are a legacy of the Mughals on the other end of the scale are as also noodles, burgers or their Indianized versions. Some of the most popular street foods are the famous aloo chaat walas who sell a dynamite masala version of potato wedges, the tikki and pani puri walas as well as the dahi bhalla chaat foods there is the array of sweet meats ranging from the pedas of Mathura to the Kulfis of Lucknow that come in some amazing flowers rooted in the traditions and heritage of India’s rich culture.

There are several localities in some of the largely visited cities of Uttar Pradesh. The Vishwanath street or ‘gali’ located in Varanasi is famous for its typical Indian sweetmeats and other foods. The Vishwanath Gali offers the indomitable foodie a huge variety of snacks and street foods in the many food stalls and shops that line both sides of the street. This street food haven of Banares has one of the most sought after South Indian foods outlet.

Here one can take a number of South Indian delights like soft puffy idlis served with a number of chutnies. Then there are the super crisp dosa and hot steaming vadas that can be had with rasam or sambhar. To round off the meal is the sweat and yummy payasam.

There are members of other street food outlets in this almost magical gate. From milky preparations like lassi flavoured with cardamoms, saffron and pistachios there is the hot, thick milk served in winters. There are milk based and other sweetmeats like jalebis, ladoos of all sorts and milk based burfis as also a large variety of sweat and salty snack foods. This flavor-full gali can set up a mouth watering challenge to the most stoic among individuals.

Similarly, the Shahenshah is another outlet of Allahabad that serves up a large range of cuisine be it North Indian, South Indian or even Chinese and continental. The ‘petha’ or a crystallized sweetmeat prepared from bottle gourd is a delight in Agra while the milk based ‘pedas’ of Mathura are another remarkable delight. 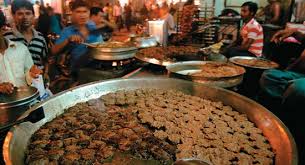 The Tunday Kebabs of Lucknow are a memorable street food among those who favour non-vegetarian, spices rich, mughlai food. The Tunday Kababi outlet at Nazirabad, Aminabad, are the most sought-after street food by foodies who prefer non-vegetarian food. Their biryanis are also much sought after. This particular preparation has been sold popularly for over a century. Several other forms of kababs like the famous kakori kabab and spicy seekh kababs are also eaten and ordered by the large resident population as well as visitors to the city.

Thus, Uttar Pradesh has lot on offer in terms of mouthwatering delectable foodstuff, sold in its several street markets.