Famous Historical Monuments in Uttar Pradesh Uttar Pradesh - Photographers' Delight Kite Festival in Lucknow Travel to Muzaffarnagar Travel to Raebareli Kanpur The Leather City Tourist Places in Unnao Weekend Getaways from Pilibhit Banarasi Sarees in Varanasi Things To Do in Bijnor Glass Industry in Firozabad Govardhan Parikrama in Mathura Tourism in Mainpuri Wildlife Sanctuaries near Mirzapur History of Bahraich Tourist Spots in Hapur Miracles of Banke Bihari Temple Tourist Spots in Bulandshahr Travel to Fatehpur Tourism in Fatehgarh Chronology of Jhansi Etah Tourism Culture of Rampur About Shahjahanpur Vindhyachal to Varanasi by Road Tourism in Hathras Tourism in Sambhal Famous Personalities of Faizabad Tronica City in Loni Culture of Ballia Jaunpur in One Day Culture of Etawah Meerut One Day Itinerary A Day in Allahabad - More than Just a Spiritual Experience Ghaziabad.... A Street Food Safari Shopping in Aligarh Top Famous Restaurants for Working Professionals in Noida Tourism in Mughalsarai Prominent Modern Industries in Kanpur Historic Events in Gorakhpur Air Safari in Agra Jim Corbett National Park Road Trip from Lucknow to Nainital via Corbett What Not to Miss while in Varanasi
Home about sports sports stadiums in uttar pradesh

Playing sports is an integral part of the personality development of a person. In India, government has taken many steps to encourage the sports culture. Be it the Commonwealth Games or the various Cricket Championships, Government of India has left no stone unturned to make the Indian atmosphere “sporty”. 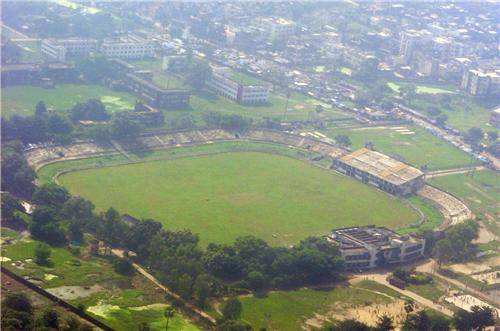 Uttar Pradesh being the most populated state of India has received special attention when it comes to sports. Many measures have been taken to encourage both indoor and outdoor games. This encouragement has borne sweet fruits with UP producing many players who have represented India on the international level.

Government has worked hard to improve the conditions of the existing stadiums and put up the required procedures to construct some new ones.

Let us look at some famous stadiums in UP.

Still under-construction, Greater Noida Cricket Stadium is being built along the motor racing circuit called, Buddh International Circuit. The stadium is expected to have 40,000 seating capacity initially which will be increased to 100,000 eventually. It is envisaged that the cricket stadium will be given a face like the historic Lord’s Cricket Ground.

The stadium is being built in accordance with the norms laid down by the International Cricket Council. It is expected to be completed by the end of 2014 and thus host some of the IPL matches the June 2015.

Located in Kanpur, the Green Park Stadium, this is the home of the indigenous cricket team of the state. Being the only stadium in UP to hold both One Day and Test Cricket International Cricket tournaments, it is kept in good conditions. The stadium is under the Sports Authority of Uttar Pradesh which takes special care of its maintenance.

The stadium has many ‘onlys’ associated with it

Also known as Dr. Bhim Rao Ambedkar Stadium, Faizabad Sports Complex, is a sports complex that meets all the international standards. Built along NH96, it is a part of multi-crore project of sports complex in Faizabad.

Forty kilometers off Delhi, Buddh International Circuit is a motor racing circuit. It hosted the Formula One Indian Grand Prix in 2011 and is best known for the same. The circuit is 5.14 km long and is the master-piece of world renowned German architect Hermann Tilke. The seating capacity as of now is 110,000.

The circuit was praised by many racers who pointed out the challenging corner combinations which were difficult to pass through with high speed.

Named after K.D. Singh, the famous hockey player, the stadium was earlier known as the Central Sports Stadium. The stadium was constructed in 1957 and is located in the heart of the city. It hosts domestic competitions quite regularly and is a home to the indigenous team of the state. The facilities offered by the stadium include a swimming pool complex, a tennis court and an indoor games complex.

As evident from the name, this stadium is named after the magnanimous Indian hockey player Dhyan Chand. It is currently serving as a home to Indian Hockey League.