Famous Historical Monuments in Uttar Pradesh Uttar Pradesh - Photographers' Delight Kite Festival in Lucknow Travel to Muzaffarnagar Travel to Raebareli Kanpur The Leather City Tourist Places in Unnao Weekend Getaways from Pilibhit Banarasi Sarees in Varanasi Things To Do in Bijnor Glass Industry in Firozabad Govardhan Parikrama in Mathura Tourism in Mainpuri Wildlife Sanctuaries near Mirzapur History of Bahraich Tourist Spots in Hapur Miracles of Banke Bihari Temple Tourist Spots in Bulandshahr Travel to Fatehpur Tourism in Fatehgarh Chronology of Jhansi Etah Tourism Culture of Rampur About Shahjahanpur Vindhyachal to Varanasi by Road Tourism in Hathras Tourism in Sambhal Famous Personalities of Faizabad Tronica City in Loni Culture of Ballia Jaunpur in One Day Culture of Etawah Meerut One Day Itinerary A Day in Allahabad - More than Just a Spiritual Experience Ghaziabad.... A Street Food Safari Shopping in Aligarh Top Famous Restaurants for Working Professionals in Noida Tourism in Mughalsarai Prominent Modern Industries in Kanpur Historic Events in Gorakhpur Air Safari in Agra Jim Corbett National Park Road Trip from Lucknow to Nainital via Corbett What Not to Miss while in Varanasi
Home about tourism not to miss tourist spots in uttar pradesh

The Great Plains of India....Retraced!!!

The Great Plains of India....Retraced!!!

Uttar Pradesh is a land of geographical diversities. A place gifted with sacred rivers, fertile cultivations, lush green pastures and serene environment. Uttar Pradesh translated from Hindi means ‘Northern state or province’. Situated in Northern part of India, it is the fifth largest in terms of land area and the most populous state of India. Uttar Pradesh, from ancient times has been the seat of Gangetic civilisation and till date maintains an important human connect. There are many places of historical and religious significance. Chronological history of this land can be traced back to the epic times of the Ramayana and Mahabharata. The culture of UP is a perfect example of the people it nurtures and nestles, a blend deep rooted in Hindi and Urdu literature. Explore the natural and man-made wonders and be amazed. Here are a few places in Uttar Pradesh which will astound you, some being sacred places, some of historical significance and others for sheer architectural brilliance. 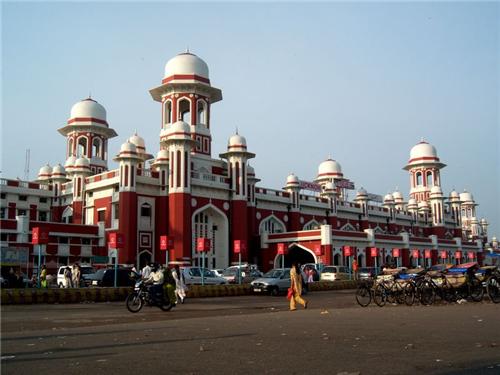 This being the capital city of Uttar Pradesh is a city glazed with rich culture known for its poetic language. Famed for its Nawabs and Kebabs, this city is dotted with monuments. Right from the minute one sets foot in to this city, one gets swept by the ancient tone filled with monumental structures, beautiful gardens and magnificent buildings. The contribution in the field of music and dance is evident right from the days of Nawabs who patronised it and has added its own colour to the beautiful weave. Few places which may not complete the very purpose of visiting Lucknow includes – Bara Imambara, Clock Tower, Rumi Darwaza, Hazratganj, Bhool Bhulaiyan, British Residency, Chattar Manzil, and Dr. Ambedkar Park. A strict recommendation for the Lucknow Mahotsav, a colourful, traditional and authentic, 10 day festival, which encapsulates and gives you the essence of Lucknow. Click Here to Know about Lucknow

Agra is known all over the world for its architectural marvels, which is spread across the sphere of this city. Perhaps, it is one destination, which receives innumerable footfalls both national and global, owing to the absolute requiem of love, ‘The Taj Mahal’. Well, here is more for a discerning traveller, The Agra fort, Khas Mahal, Panch Mahal, Wildlife SOS, Jama Masjid, Chini-Ka-Rauza, Itimad-Ud-Daulah, Dayal Bagh and Sikandara. This place is famous for its sweet meat ‘Petha’ and Mughlai Cuisines, don’t forget to try them too.

A standing testimony of the Mughal rule, and served as the capital for more than a decade. Fatehpur Sikri is situated 37 kms away from Agra. Akbar took exceptional interest in building Fatehpur Sikri. Due to the availability of red stone in abundance almost all the buildings were built using these. The buildings of Fatehpur Sikri also incorporates various architectural styles including a few imbibed from Gujarat and Bengal. Some of the important tourist places are, Jama Masjid, Tomb of Salim Chishti, Buland Darwaza, Diwan-I-Khas and Birbal’s house.

The birthplace of Lord Krishna, Mathura is situated on the banks of River Yamuna. The temple built over the prison where Devaki and Vasudev were held prisoners by her own brother Kansa. The temple was built by Raja Veer Singh Bundela of Orcha. The temple stands right on the place where Lord Krishna was born. Many utensils, sculptures, statues have been excavated from this place. The fascinating fact is that it shares a common wall with a mosque. The beautiful ghats, the flowing river and the mystical air here is ethereal. Places of importance being Govardhan Hill, Mathura Museum, Kans Qila and Raja Bharatpura’s Palace.

Just a 15-Km drive will transport you to the magical land, Vrindavan, which shares the utmost significance like Mathura. This place resonates the days of Lord Krishna with his friends and the Gopikas. It has numerous ancient temples, beautiful Ghats and many sacred Kunds. Mathura and Vrindavan are twin cities, and carries equal semblance to devout Hindus, one without the other looses the charm. The Yamuna River, Rangji temple, Shahji temple, Iskcon temple, Govind Dev temple, Bramha Kund and Govind Kund remain to be few important tourist and religious destinations.

Literally translates to ‘Abode of God’, Allahabad lies at the watersmeet of the three sacred rivers Ganga, Yamuna and the mythical River Saraswati. This ancient place has millions of tourists visiting, for discrete reasons. Such is the abundance of the city be it the sacred places, historical monuments or study centres. The Kumbh Mela is a major attraction. The crowd puller of the place being, Sangam, Hanuman Mandir, Allahabad Fort, Anand Bhavan, Akshaya Vat, Swaraj Bhavan, Allahabad Museum, All Saints Cathedral, Company Bagh and Khusro Bagh. This city carries the vibrance and the current of the river Ganga that flows along....which will startle you as you set to explore.

Considered the most sacred place of Hindus. If Mecca is for Muslims, Kashi is for Hindus, such is the semblance. The timeless and mystical beauty is thronged by people for many reasons, some for performance of religious rites to their ancestors, some to attain ‘moksha’, and some merely as a secular tourist. Varanasi is a city of multiple identities and significance. Here are a few places which attracts people to its sacred space, the Kashi Vishwanath Temple, Manikarnika Ghat, Banaras Ghat, the archaeological fort, Ramnagar Fort, Chunar Fort Chaumsathi Ghat and Sarnath. The inner peace one experiences walking along the length and breadth of the city is unexplainable.

Kanpur, once known as the Manchester of the East, is now one of the most established Industrial towns. Situated on the banks of Yamuna, it has its fair share of rich historical and religious significance. It played an important role in the ‘Revolt of 1857’. Many places that reminds us of the British and the Mughal rule can be seen at his commercial capital of Uttar Pradesh. The world-renowned institute of Science and technology, IIT Kanpur, remains a dream destination for many aspirants. Sightseeing is not a taxing task as all the places are closely located. Here are a few places of interest, Ganges Barrage, Bithoor, Jajmau, Jain Glass temple, Sri Radha Krishna temple, Mecca Masjid, Allen Forest Zoo, Kanpur gardens and the agricultural gardens.

The ‘Ram Janma Bhoomi’, is situated on the banks of Sarayu. This place has an immense sense of sanctity attached to it. Also referred to as the ‘city built by gods’. This place has been debated round the clock as to whether this was initially a mosque or a temple. Owing to this fact Ayodhya, is frequented by both Hindus and the Muslims. This is where, the epic Ramayana is said to have taken place. The important attractions being Chakravarthi Maharaj Dashrat Mahal, Nageshwarnath Temple, Mausoleum of Bahu Begum, Moti Mahal, Angad Tila and Amawan Temple.

The very abode reverberates the name of ‘Jhansi Ki Rani’, valour personified. The lady who challenged and gave the British a nightmare. Jhansi being the gateway to Bundelkand, is situated on the banks of the Pahuj river. Having served as the capital of the Maratha Empire, this city has a major significance in Indian history. The Jhansi Fort, Government Museum, Rani Mahal, Narayan Bagh, Jari Ka Math, Garhmau Lake, Chirgaon, Mahalakshmi temple, Maharaj Ganghadar Rao Ki Chatri and Parichha.

To explore the expanse of Uttar Pradesh in one shot may be next to impossible, given the vast latitude... both literally and otherwise. It asks for visits more than just once. The charm of the place ensures you visit again and again - a mystery box, isn’t it.

Comments / Discussion Board - The Great Plains of India....Retraced!!!