Uttar Pradesh is an important place for the followers of Hinduism. The temples and ghats that are situated on the banks of River Ganga are the important reason for thousands of pilgrims to throng the state everyday to perform various poojas and rituals. It is also to be noted that whatever pooja and ritual that are performed here cannot be performed anywhere. 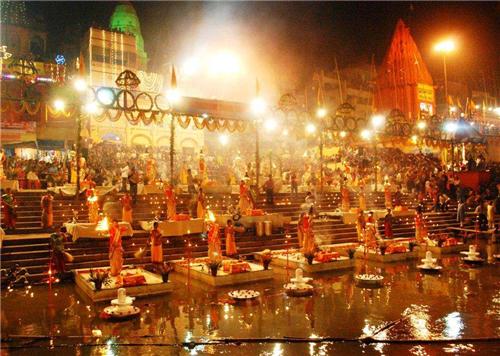 Some of the holy places of importance where the rituals can be performed are Allahabad, Mathura, Vrindavan and Varanasi. For every occasion there are separate rituals as well as ceremonies that are followed in Uttar Pradesh. Right from the ritual bath, Havana, Pooja, Yagna, there are various rituals carried out by the individuals. These rituals performed on the Ganga Ghats are also associated with many fairs and festivals and people perform many poojas or havans for safety, prosperity or just to satisfy their deities.

AgGhat is nothing but a series of steps that leads down to the river Ganga which is widely used for bathing or for performing various rituals by the pilgrims. Some ghats in UP are used exclusively for cremation. Most of the river banks are built with ghats of eighteenth and nineteenth century which also includes many palaces, pavilions, temples, terraces, etc along with the chain of stone steps or Ghats. Each of the ghats is also marked by a lingam and has its own special place in the religious phenomena. These ghats are considered to have been built during the reign of Marathas and the most of the ghats are built by Marathas, Holkars, Scindias (Shindes), Bhonsles and of course by Peshwas. These are connected to many myths and legends and some of them are owned privately. One of the popular tourist attractions is the morning boat rides past through ghats on the Ganges.

Some of the important Ghats in UP are Kedar Ghat, Asi Ghat, Chausathi Gathi, Dashashwamedha Ghat, Chauki Ghat, Lalitha Ghat, Manikarnika Ghat and Man Mandir Ghat. In the most popular Panchtrithi Yatra, the pilgrims cross over Dashashwamedha, Asi, Panchganga, Adi Keshva and finally Manikarnika Ghat. The devotees take along with them a panda who recites sankalpa and a ritual is done at every phase of the journey and it is believed that this will please the God. Let us see here about some of the ghats.

It is located in proximity to the Vishwanath Temple. It is also the most glorious ghat in Varanasi. This ghat is associated with two mythologies of Hinduism. In one of them, Lord Brahma has created this ghat in honour of Lord Shiva who came to meet him whereas in the other Lord Brahma has performed a yajna on this ghat. Every evening Agni Pooja is performed by priests here and it is being dedicated to Sun (Surya), Fire (Agni) River Ganges, Lord Shiva and of course to the entire world.

There are two legends associated with this ghat and in one of them a pit was dug by Lord Vishnu by the chakra he owns and the same was filled with the perspiration of Lord Vishnu that arose during his penances. According to another legend, Lord Vishnu’s earring (manikarnika) had fallen inside the pit and the same was seen by Lord Shiva. There is also another legend goes by in which it is said that Goddess Parvati, to make Lord Shiva to go around along with the devotees, hid her earring and made him to look for it on the Ganges’s river banks where it got lost. According to this, Lord Shiva is considered to have questioning each and every body that is cremated here whether it saw the earrings. Yet another legend says that King Harischandra was brought by owner of Manikarnika Ghat and was made to work here as most of the bodies were brought here for cremation. It is said that this ghat got its name from Laxmibai, the queen of Jhansi.

Otherwise called as Shinde Ghat lies along the northern side of Manikarnika ghat where a Shiva temple lies half submerged in the river due to the ghat’s huge weight during its construction some hundred fifty years back then. There are several of the Kashi’s most important temples situated high on top of this ghat in the winding alleys called as Siddha Kshetra. It is also said that it is the birth place of Lord Agni who is considered by Hindus as Fire God. Also, devotees of Hinduism appease Lord Vireshwara for want of son.

The Jaipur’s king Maharaja Jai Singh II constructed this ghat in 1770 and at the same time around Jantar Mantar was laid with elaborate castings on the window at Delhi, Ujjain, Mathura as well as Jaipur. On the northern side of the ghat, a lovely stone balcony is found where the pilgrims offer pooja to the Someswara Lingam, which is called as the Moon Lord.

The late King of Nepal had on the northern side of the ganges built a ghat which was named as Lalita Ghat. There is a temple called Ganges Keshav Temple is built in the style of Kathmandu architecture. The temple has evidence of Lord Shiva, the image of Pasupateswara and here all local festivals that include musical parties, games etc are held at the picturesque Assi Ghat is also liked by all and favourite of photographers and painters. In the Assi Ghat only Swami Pranabananda who was the Bharat Sevasharam Sangh’s founder said to have obtained ‘Siddhi’ under the guidance of Guru Gambirananda of Gorakhpur.

Apart from the above, Maan-Sarowar Ghat was built by Man Singh of Amber, Darbhanga Ghat by Maharaja of Darbhanga and Tulsidas wrote Ramacharitamanas at Tulsi Ghat. Bachraj Ghat is quite popular as it has 3 Jain temples and becomes Jains must visit pilgrims place. “Sri Kashi Math Samsthan’s” headquarters is located on the banks of Brahma Ghat and this has been followed by Goud Saraswat Brahmins. 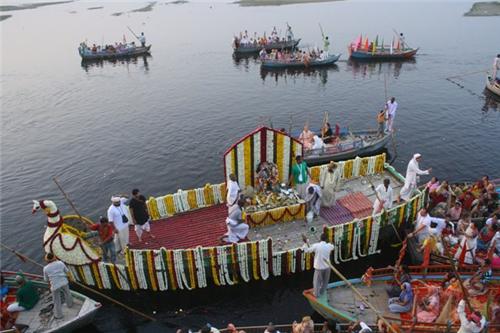 Vrindavan’s popular tourist spot is the Kesi Ghat that is on the banks of River Yamuna. According to the legend, Lord Krishna after killing Kesi, the demon, bathed at this ghat. From then on devotees take a holy bath in this water to seek the blessings. Here, every evening an aarti is done for Yamuna River.

Apart from the above, Vrindavan has some more ghats like Chir Ghat, Imli Taal Ghat and Kaliya Ghat.

It is situated on the banks of River Yamuna and is the main ghat among the 25 other ghats in Mathura. The traditional parikrama starts as well as ends at Vishram Ghat. It is said that Lord Krishna rested here after killing Kansa.

Allahabad also has many ghats with both boating and bathing facility especially constructed along the left bank of River Yamuna and they are Saraswati ghat, Balua ghat, Nehru ghat, gau ghat, etc. In Allahabad, the River Ganga and River Yamuna merge with the mythological River Saraswati at a place called Sangam ghat. The eastern rampart of the Allahabad fort overlook Sangam and Sangam is also the site where Annual Magha Mela/Kumbh Mela/Ardh Kumbh are held.

It is believed that Ganga has flown from heaven to wash away the worldly sin of the human race. There are different methods of celebrating the ritual offered to Holy Ganga i.e. some bathe, some dip in the water, some drink the water, some of them make offerings to sun God with the water and they will also fill a pot full of holy water to take back to their homes to perform rituals as well as for the purification. The offerings to the sacred waters are in the form of flowers, lamps, fruits and respectful prayers. During festivals as well as religious occasions, boat rides are organised and in the evening the ghats are lighted with earthern lamps as many as thousand in number floating in the river and it is also believed that these lights carry the wishes of the pilgrims. The most scenic view is the pilgrims performing at sunrise in the river set against the back drop of the temples which is a must see sights in the world.

According to Hindu tradition, cremation is one of the rites of passage and it is followed on the Ghats of Varanasi by performing puja, mantras and hymns during the cremation. Of all the ghats, Manikarnika ghat as well as Harishchandra ghats is maintained exclusively for this. On a day, approximately eighty bodies are cremated on the ghats. Over the years, this became controversial as it causes pollution to the Ganges. In 1980, the Indian Government initiated a movement called “Clean Ganga” which focuses on cremation as well as some other pollution along the ghats of Varanasi. Now-a-days, most of the cremations are done somewhere but submersion of ashes in done in the River.