Famous Historical Monuments in Uttar Pradesh Uttar Pradesh - Photographers' Delight Kite Festival in Lucknow Travel to Muzaffarnagar Travel to Raebareli Kanpur The Leather City Tourist Places in Unnao Weekend Getaways from Pilibhit Banarasi Sarees in Varanasi Things To Do in Bijnor Glass Industry in Firozabad Govardhan Parikrama in Mathura Tourism in Mainpuri Wildlife Sanctuaries near Mirzapur History of Bahraich Tourist Spots in Hapur Miracles of Banke Bihari Temple Tourist Spots in Bulandshahr Travel to Fatehpur Tourism in Fatehgarh Chronology of Jhansi Etah Tourism Culture of Rampur About Shahjahanpur Vindhyachal to Varanasi by Road Tourism in Hathras Tourism in Sambhal Famous Personalities of Faizabad Tronica City in Loni Culture of Ballia Jaunpur in One Day Culture of Etawah Meerut One Day Itinerary A Day in Allahabad - More than Just a Spiritual Experience Ghaziabad.... A Street Food Safari Shopping in Aligarh Top Famous Restaurants for Working Professionals in Noida Tourism in Mughalsarai Prominent Modern Industries in Kanpur Historic Events in Gorakhpur Air Safari in Agra Jim Corbett National Park Road Trip from Lucknow to Nainital via Corbett What Not to Miss while in Varanasi
Home about tourism river tour along the ganges in uttar pradesh

River Tour along the Ganges in Uttar Pradesh

River Tour along the Ganges in Uttar Pradesh

The Ganges has nurtured great cities on its banks. It feeds hundreds of big towns and cities on both sides of its 2525 km long flow from Himalayas to the Bay of Bengal. The river is sacred to the Hindus since the age of the Vedas. It is not just a river; it is their ‘mother Ganga’. It has the power of absolution. A bath in the Ganges absolves man of his worldly sins. The cities like Haridwar, Varanasi, Allahabad, Patliputra, Kanauj, Kolkata and Gangasagar are just a few names of the legendry cities on the banks of the Ganges. 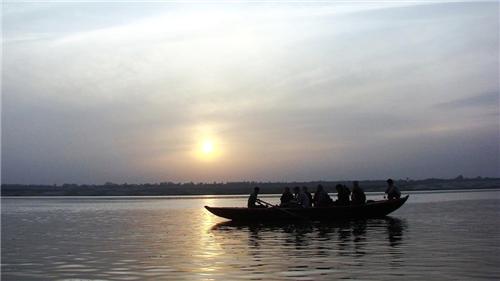 The river is important to UP not only for religious but for economic reasons also. It irrigates the vast agricultural areas of Uttar Pradesh and provides livelihood to millions of its people. The Ganges and its tributaries are a perennial source of water to Uttar Pradesh. The needy farmers of UP consider the Ganges to be their lifeline. Tourism is another source of livelihood provided by the Ganges. The holy cities of Kanpur, Varanasi and Allahabad sit on its banks and attract millions of people to these places for excursion as well as pilgrimage.

The main cities to tour along the banks of the river Ganges are Kanpur, Allahabad, Varanasi and Mirzapur.

The first important town by the Ganges in UP is Kanpur. Once known as the Manchester of the East, the city of Kanpur is a famous industrial town of UP. The city is known for its leather, textiles and engineering products. It is a historically important city right from the time of the mythological past of the Hindus. Kanpur is also the seat of the IIT, the premier technology institute of India. When at Kanpur, it will be a good idea to visit Brhmavarta, also called Bithoor, and situated just 23 kms from the city. 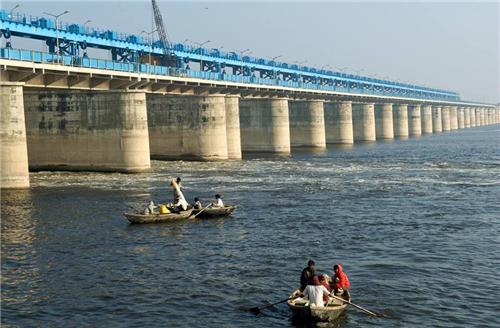 It is said to be the birthplace of Lord Rama’s sons Luv and Kush. It also has a historical association with the British period. The Peshwa Baji Rao II was banished by the British here. His son Nana Sahib was a prominent freedom fighter in the first war of Independence from the British in 1857. A boat ride will be pleasant to visit various famous Ghats of the Ganges around Kanpur. It is not very common today because of the heavily polluted portion of the river near Kanpur but the area around Bithoor is still good for a boat ride in the evening.

The next city to visit is Varanasi, Kashi or Banaras. It is at a distance of 121 kms from Allahabad. The journey via NH 76 takes a maximum time of 2 hrs. A day is not enough to enjoy the Ghats, the legendary places, the holy shrines and temples and the bazaars of Varanasi. The visit to the Vishwanath temple is an experience in itself. Varanasi is a depository of ancient legends and stories that can still mesmerise a person. The Ghats in Varanasi are legends in themselves. The famous Ganga prayer known as the ‘Ganga Lahari’ is a bewitching example of the lore of the Ganga Ghats. 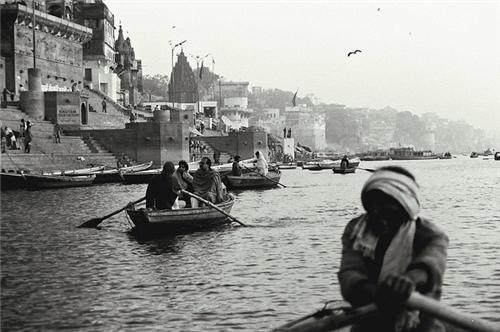 It is less famous but a highly poignant lore of the 17th century poet Jagannatha – the composer of the prayer to the Ganga. It is said that the poet was banished from his caste as a punishment for marrying out of his religion. When everything failed to redeem the situation for him and his love, the duo sat on the Panchganga Ghat of Varanasi. The poet prayed to the Ganga-composing his now legendry verses. With each verse the waters of the Ganges rose one step up and by the time the prayer had finished, the waters had risen high enough to sweep the duo away. The legend of the Lahari still persists.

The Ganga Aarti on the Ghats every evening is a well documented and most visited evening ritual in Varanasi. It is a mesmerising scene invoking all the primitive, religious and philosophical feelings to uplift the soul and purify a person. Two more important places are close by. Kushinagar and Sarnath are among the world Buddhist heritage as the former is the place of Nirvana of The Buddha and the latter is where he gave his first sermon after attaining enlightenment. 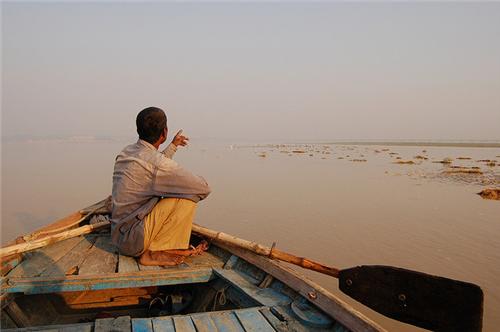 The next place in the UP itinerary on the banks of the Ganges is Allahabad. It is not easy to get a boat from Kanpur to go to Allahabad because the river transport system of the Ganga is almost defunct. But Allahabad is highly accessible by train and bus from Kanpur. It is at a distance of about 210 kms with a maximum 3 hours journey period by bus and 4 hrs by train. The city was known as Prayag in the ancient times. It is one of the holiest places on the Ganges.

It is the seat of the Kumbh festival - the biggest congregation of Human Beings on the face of the earth every 12 years. People from all over the world visit Prayag every year for the last rites of their ancestors on the banks of Sangam or Triveni- the confluence of the Ganga, the Yamuna and now extinct the Saraswati River. The confluence of these rivers provides a wonderful opportunity to the visitors to move from one Ghat to another by a boat. An evening ride on the shimmering waters of the Ganges in the traditional Indian flat bottomed boats is a remarkable treat to both the eyes and the mind.

Situated at a distance of just 50 kms in the North and North-east of Varanasi is the town of Mirzapur. This is one of the important places in the UP tourism circuit because the holy river Ganga meets the Vindhya Range here and the shrine of the Vindhya Devi is situated on the low slopes of the range near Mirzapur. The city is a famous centre of carpet and brassware enterprises.

It is also known to have existed in 5000 BCE with all the artefacts of the age unearthed here by the archaeologists. In its present form it was established by the British officers. There is a beautiful waterfall close to the city along with attractions like the Kali Koh and cave paintings dating back to 800 BCE. One of the paintings of a horse driven chariot and the rider throwing a wheel is associated with lord Krishna.

Other Cities along the Ganges in UP

Kannauj is another city to visit on the banks of the river Ganges in UP. The city is famous for the distillation of scents in the original Indian method of making fragrances. It is called the Paris of India for its scent making industry. The city lies to the north of Kanpur at a distance of 80 kms. It is readily accessible via rail and roadways within 2 hours. It is the biggest producer of the Rose water and other Indian scents.

The name of the city is said to have been derived from the word ‘the hunch-backed maiden’ although there is no record of any associated legend. The ‘kanyakubj’ sub-caste of the Brahmins of UP is said to have originated from Kannauj. The city was the capital of the King Harshvardhan in the medieval period whose empire once spanned the whole of the Indo-Gangetic plain. The details of his just and prosperous reign are found in the Chinese traveller Huen-Tsang’s travelogue of India.

The biggest producer of potatoes in UP, the city of Farrukhabad lies at a distance of 56 kms from Kannauj on NH 91. The city is reachable within an hour by UP Roadways buses, private cars and taxis from Kannauj. The city is basically an agrarian centre dependent on farm produce from its highly fertile lands. It is also famous for the world renowned ethnic embroidery called ‘Zardozi’.

The old Fatehgarh fort at the place gives the town its name. It is a twin city of Farrukhabad which is situated just at a distance of 4.7kms and a 6 to 7 min drive away. The town is a military cantonment area with the Rajputana Regiment Centre and the Sikh Light Infantry centre situated here. The famous temple of Hanuman at Bholepur is visited by thousands of devotees on auspicious days.

Comments / Discussion Board - River Tour along the Ganges in Uttar Pradesh