Famous Historical Monuments in Uttar Pradesh Uttar Pradesh - Photographers' Delight Kite Festival in Lucknow Travel to Muzaffarnagar Travel to Raebareli Kanpur The Leather City Tourist Places in Unnao Weekend Getaways from Pilibhit Banarasi Sarees in Varanasi Things To Do in Bijnor Glass Industry in Firozabad Govardhan Parikrama in Mathura Tourism in Mainpuri Wildlife Sanctuaries near Mirzapur History of Bahraich Tourist Spots in Hapur Miracles of Banke Bihari Temple Tourist Spots in Bulandshahr Travel to Fatehpur Tourism in Fatehgarh Chronology of Jhansi Etah Tourism Culture of Rampur About Shahjahanpur Vindhyachal to Varanasi by Road Tourism in Hathras Tourism in Sambhal Famous Personalities of Faizabad Tronica City in Loni Culture of Ballia Jaunpur in One Day Culture of Etawah Meerut One Day Itinerary A Day in Allahabad - More than Just a Spiritual Experience Ghaziabad.... A Street Food Safari Shopping in Aligarh Top Famous Restaurants for Working Professionals in Noida Tourism in Mughalsarai Prominent Modern Industries in Kanpur Historic Events in Gorakhpur Air Safari in Agra Jim Corbett National Park Road Trip from Lucknow to Nainital via Corbett What Not to Miss while in Varanasi
Home about transport railways in uttar pradesh

Railways are the largest and the cheapest form of transport for millions of people whom it ferries from one corner of the country to another. It caters to the transport demands of more than 200 million inhabitants of UP. 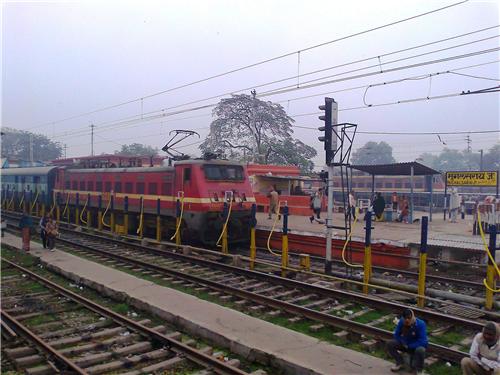 Railways play a very significant role in the economic development of Uttar Pradesh. It has the largest network of railway lines and infrastructure for moving people and products from within the state as well as outside. Uttar Pradesh has 8546 km length of railway track reaching to nearly the 6th highest density of the lines falling in the state territory. Around 2575 km of track out of this big layout has been converted into broad gauge.

The railways in UP are controlled by three Zones, viz. NER divided into Lucknow, Izzatnagar and Varanasi divisions, NCR into Allahabad, Agra and Jhansi, and NR with its Lucknow and Moradabad divisions falling in UP. All these three zones run some important trains within their areas of operation that handle the interests of UP.

Uttar Pradesh is mainly served by the North Central Railway which is called the Workhorse of Indian Railways. The NCR is also called the heartbeat of Indian Railways. Ghaziabad lies to the North of NCR from where it starts and goes up to Mughalsarai in the East. This is the Howrah-Delhi trunk route that falls within UP. Another major route that runs through UP and served by NCR is the Delhi-Mumbai-Chennai route. Both these routes are mainly double line broad gauge electrified routes in UP.

There are 427 railway stations in UP. Kanpur is the busiest railway station on the Howrah-Delhi route. It holds the record of having the largest route interlocking system in the world. Kanpur is also the busiest railway station of UP. It caters to the arrival and departure of more than 280 trains every day. This large train-traffic serves a great number of commuters and regular passengers travelling to other parts of the state and outside. This is the life line for about 150000 passengers per day. This station has also been included in the list of ‘50 world class stations’ to be developed by the railways in India. There are 4 more stations in the list falling in UP. These are Varanasi, Agra Cantt, Gorakhpur and Mathura Junction.

The Railways are extremely important for UP because it connect its tourist centres, important pilgrimage places and commercial centres of UP like Varanasi, Sarnath, Allahabad, Ayodhya, Ranikhet, Agra, Mathura, Vrindavan, Fatehpur Sikri, Moradabad, Kanpur, Faridabad, Kausani Dudhwa and Meerut with Delhi and the state capital Lucknow.

Uttar Pradesh is connected with other state capitals and major towns of India with all types of mail, express and intercity trains. It also has special trains for fast connectivity like Rajdhani, Shatabdi etc. The important Rajdhani trains from New Delhi to Dibrugarh, New Delhi to Howrah, New Delhi to Patna, New Delhi to Sialdah, New Delhi to Ranchi and New Delhi to Guwahati run via Kanpur and 3 other trains connecting Bengaluru, Chennai and Secunderabad run via Jhansi. A host of Shatabdi trains also run to connect Agra to Jaipur and Delhi, Kanpur to Delhi and Lucknow to Delhi.

The important stations connecting UP with other parts of the country and inside are Kanpur, Allahabad, Lucknow, Varanasi, Mugalsarai, Jhansi, Jaunpur, Sultanpur, Faizabad, Bareilly, Moradabad, Gonda, Sitapur, Saharanpur, and Muzaffarnagar. These are junctions connecting all points of compass in UP.

Some important contacts of NCR are given below.