Famous Historical Monuments in Uttar Pradesh Uttar Pradesh - Photographers' Delight Kite Festival in Lucknow Travel to Muzaffarnagar Travel to Raebareli Kanpur The Leather City Tourist Places in Unnao Weekend Getaways from Pilibhit Banarasi Sarees in Varanasi Things To Do in Bijnor Glass Industry in Firozabad Govardhan Parikrama in Mathura Tourism in Mainpuri Wildlife Sanctuaries near Mirzapur History of Bahraich Tourist Spots in Hapur Miracles of Banke Bihari Temple Tourist Spots in Bulandshahr Travel to Fatehpur Tourism in Fatehgarh Chronology of Jhansi Etah Tourism Culture of Rampur About Shahjahanpur Vindhyachal to Varanasi by Road Tourism in Hathras Tourism in Sambhal Famous Personalities of Faizabad Tronica City in Loni Culture of Ballia Jaunpur in One Day Culture of Etawah Meerut One Day Itinerary A Day in Allahabad - More than Just a Spiritual Experience Ghaziabad.... A Street Food Safari Shopping in Aligarh Top Famous Restaurants for Working Professionals in Noida Tourism in Mughalsarai Prominent Modern Industries in Kanpur Historic Events in Gorakhpur Air Safari in Agra Jim Corbett National Park Road Trip from Lucknow to Nainital via Corbett What Not to Miss while in Varanasi
Home about tourism religious tours in uttar pradesh

Uttar Pradesh, the most populated state in India, houses people from almost all religions around the world, be it Hindus, Muslims, Christians, Budhhists, Jains and Parsis. The history is the proof of a harmonious balance between all these religions, of course sometimes marked by horrendous riots. Each of these religions has an important pilgrimage centre situated in UP. Let’s look at these centers one by one. 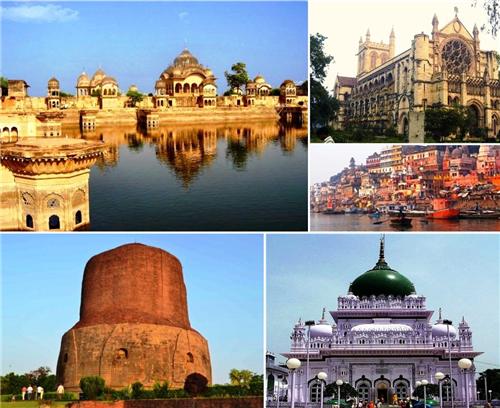 Religious Tours for Hindus in UP

Majority of the population in Uttar Pradesh comprises of Hindus and, thus, UP consists of many Hindu pilgrimage places. Be it Varanasi, on the river of sacred river Ganga or the historic city of Ayodhya, Hindus from all over the world pay offering at these pilgrimages. To visit the pious Ganga aarti at the Dashashwamedh Ghat is the dream of every Hindu.

Equally popular is “Sangam” in Allahabad, which is the confluence of the holy rivers Ganga, Yamuna and Saraswati. Allahabad also witnesses the largest of all festivals in the world, The Kumbha Mela.

Ayodhya, the birthpace of Lord Rama, is significant as it is the here when Lord Rama came after completing an exile of 14 years. It is from where the most important festival of Hindus, Diwali, originated. Visiting this place on Diwali is bliss to eyes as the whole city is illuminated with lights and candles.

Talking about the Hindu pilgrimages how one can forget the significance of Mathura and Vrindavan, the two cities which recites the tales of Lord Krishna and his brave childhood. Every square feet of Mathura-Vrindavan engulfs Lord Krishna in it.

Mathura and Vrindavan together comprises of beautiful temples that story-tell the life of Lord Krishna. There are over 5000 temples in Vrindavan alone. Popular temples include Dwarkadhish Temple located in the Eastern part of Mathura. ISKCON temple and Bankey Bihari temple in Vrindavan are again very popular among Hindus. All of these temples remain close from 12 pm to 4: 30 pm.

The “Lath- Maar Holi”, a festival where people celebrate the festival of colors by beating each other with a wet cloth, is extremely popular in Vrindavan.

Religious Tours for Buddhists in UP

Uttar Pradesh is very significant for Buddhists all around the world as it is here, in Sarnath, where Lord Budhha gave his first preaching. Some of the most important Buddhist pilgrimage sites in the world reside in the Sarnath-Kushinagar-Shravasti circuit. One will also find outstanding statues in this circuit.

Religious Tours for Muslims in UP

Uttar Pradesh houses many shrines of which belong to the hermit of Barelvi Sufi Order. The most renowned among them is the shrine of Hazrat Salim Chishti in Fatehpur Sikri.

Dewa Sharif in Lucknow is an equally important shrine of some other Sufi saint.

Religious Tours for Jains in UP

Religious Tours for Christians in UP

Christianity was introduced in Uttar Pradesh by a Muslim Mughal Ruler, Akbar. Akbar was very well known for his secular ideology. Also, during the British Raj many Hindus converted themselves into Christians. Albeit, Christianity still remains in minority in Uttar Pradesh, but is home to many beautiful churches like All Saints Cathedral, Allahabad and Kanpur Memorial Church, Kanpur.

All Saints Cathedral Church is well-known for its archaic architecture. The Church is surrounded by a plush green garden. The architecture is symbolic to colonial India. It also houses different plaques symbolizing the death of many British nationals in India.