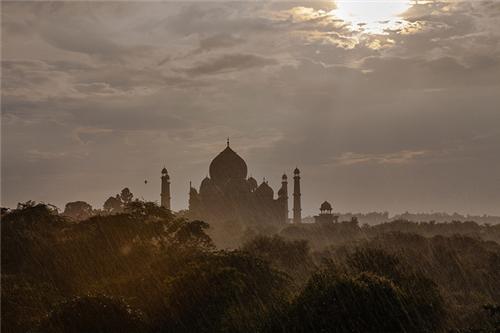 The best time to visit Uttar Pradesh is during the months of October, November, December, January, February and March. This is the most pleasant of times and is bereft of the miseries of heat, dust, hot winds and humidity of summer and monsoon. The summers have uncomfortably high temperatures. Too hot a climate and hot breezes blow across the plains. These hot winds are called ‘Loo’. During this period it is advisable to stay indoors and avoid venturing out.

Variations in Climate and Temperature in UP

The vast expanse of Uttar Pradesh has an undulating topography which is evident as hilly terrain towards Uttarakhand and the large stretches of well-irrigated plains of the Ganga and the Yamuna as also the confluence of the three rivers at the Sangam or Prayag at Allahabad, the very heartland of Uttar Pradesh. The best time to visit these historically, religiously and environmentally rich areas is during the post monsoon or autumn through spring. The variations in temperature range from a low three degrees centigrade to a high forty five degree centigrade. The average temperature, however, remains around eighteen degrees centigrade. This temperature range is observed during the months from April to June and from October to November. The extremely hot summer and extreme cold winter seasons are successively unbearably very hot and very cold. Some the most interesting sights of Uttar Pradesh are located at Agra.

The monsoon months of June-July and early August are very hot and humid. It is in these three months that the entire land becomes richly green. The early showers are most welcomed by the entire environment including the human beings, the animals and birds as well as the trees, plants and the very land itself after long and very hot months of summer. The heat and dust is washed away by the cool rains.

In Vrindavan and Mathura it is a time for rejoicing. Swings adorn most of the ancient trees all across the land. The myths of Lord Krishna are reenacted through ‘Ras Lila’ or dance dramas organized at the foot of the Govardhan parvat whereby the young boys and maidens swing upon elaborately decorated swings. Even the Lord is known to dress up ceremonially and give royal ‘darshan’ or special appearances at some of the prominent locations.

Almost all the historical cities especially those of Agra, Fatehpur Sikri and Sikandra should be visited only at the onset of winter that is any the months of October and November. It is the ideal time for taking leisurely walks through the resplendent Mughal edifies like the Taj Mahal, the Buland Darwaza, and the mausoleum of Sheikh Salim Chishti as well as the beautifully laid out Mughal gardens. The range of temperatures is remarkable from a low of two degrees centigrade to a high of fourteen degrees centigrade during the winter season.

The religious cities of Vrindavan and Mathura have been attracting tourists and pilgrims from India and abroad all around the year. However, during festivals and special days that are associated with the main ruling deity these ideal visiting times are usually in August and September.

Thus, Uttar Pradesh has a very wide range of temperatures, climates and seasons and yet it is favoured by devout visitors all the year around. However, ideally the best time to avoid long tours of Uttar Pradesh is during the extreme summer months. Nevertheless, it is good to visit all through the remaining months.